Many years ago, 2 AUC students began directing a performance of monologues based on stories of women and their memories and experiences of womanhood. The monologues exposed real women’s stories and provided a space for free expression on controversial issues.

The AUC performance provoked a variety of positive and negative reactions including excitement, shock, and anger.

In an article written about the performance one cast member noted that “there is plenty that is relevant and interesting for Egyptians, but I would love to see it adapted into something more culturally relevant.” We wanted a performance that felt close to home, something that was undeniably relevant to the greater community.

We also wanted to continue letting people write for themselves instead of being written about. And so, an idea turned into a flyer. “If you have a story about yourself or a woman you know, please pick up a submission form and share it.” And here we are, 5 years and 500 stories later, sharing a selection with you every year in the BuSSy Project…

Why theater? Because we felt that this would be the best way to reach a large body of people while providing the story tellers – women and men – with a direct opportunity to publicly reclaim the truth as they experienced it. 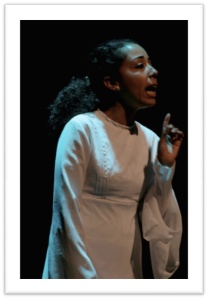 Putting this performance together has been a challenging experience for everyone involved. At the beginning, most stories were contributed anonymously. Over time, writers did approach us to claim certain stories as their own, and were then given the opportunity to be involved in casting and directing. Others shared their stories – not for the purpose of sharing it with the public, but for personal reasons. We did our best to include stories that touch on the widest range of experiences from women and men in our community.

Today, the project extends beyond AUC and beyond “women’s issues”. After four successful performances BuSSy now aims to tackle the complexity of gender issues from the perspectives of both women and men.

In July 2010, The BuSSy Project struggled to find a stage for the annual performance of 2010. Finally we succeeded in getting a cafe to set up a stage and a section of a parking lot (effectively for the audience who paid for their drinks)…it was a 2 night deal, by the second night of the performance, Censors had already heard about us and came to the performance to make sure we abided by their red tape…

we mimed the many lines and scenes that were censored…. which was a statement on its own .. it was very sad thing to happen along with a wave of strange repressing aggressive press and media local coverage that missed the whole point of the project. it missed the very soul of The BuSSy Project..

The BuSSy Project invited among many people that night: Khaled Abol Naga….who was not only supportive of the project but joined our team right then. He offered right away to re-produce it for film in an attempt to document it and keep it for the future generations. He said: “This is a Gem!, its a Bold, Valid, True and in-your-face statement of a generation about gender issues that MUST  be preserved… “

few weeks later We were FILMING! :

In February 2012 BuSSy collaborated with Mahatat, and took a selection of its’ monologues to the female carriages of the Cairo Metro, provoking a variety of very interesting reactions from the public!

To learn more about BuSSy’s experience in Mahatat click here

When invited to perform in D-CAF censorship festival in March 2012, BuSSy did not hesitate to share a selection of its’ censored monologues from its 2010 performance.

In order to simulate the experience, the monologues were first mimed to the audience, as presented on the 2nd performance night in 2010, followed by an uncensored performance of the same material.

In July 2012, and in collaboration with harassmap and Mashrou3 El Mareekh Open Mic, BuSSy proudly presented “Ya 3asal”; a selection of new BuSSy stories  focused on the theme of harassment and the body. This is a work in progress that continues to develop with new stories and additions around the theme, with future performances to come!

In October 2012, and for two consecutive days, BuSSy presented four performances at El Warsha Theater Troupe. The performances developed on the theme that was introduced in BuSSy’s performance at Darb 1718 in July 2012. The theme and concept were first created at a workshop discussion surrounding the experiences and stories of the participating men and women about how the body is perceived in Egyptian society.

BuSSy participated in the annual Hakaya storytelling festival in Amman in September 2012. The performance was based on the personal stories of the storytellers revolving around the perception of the male and female body in the Society, a development on the former performance in July 2012 in Darb 1718.

In July 2012 BuSSy group took to the streets and staged 3 different harassment situations to test the reaction of the public on the street, and recorded the reactions of both the people on the street and the participants in the experiment.

In October 2012, BuSSy traveled to Beirut, Lebanon for a meeting of Arab artists at “Menassa for Contemporary Arab Theater.” BuSSy participated in the presentations and discussions about the evolution of contemporary Arab theater that took place in this meeting.

Our stories today reflect the real issues of both genders, from a wide variety of classes and backgrounds. It is our goal to perform in places where we can reach the greater public, in order to fulfill our greater mission of speak out that which is never spoken of. BuSSy strives to create positive change within the community by giving voice to the voiceless, and showing the truth to the blind.